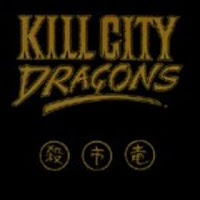 Fletchanator's comment: This was the only album recorded by UK glam sleazesters Kill City Dragons. Formed by American guitarist Steve Von Saint, a veteran of the LA scene who had played with future members of LA Guns and Faster Pussycat. KCD adopted the sound of the LA sleaze bands, with some English hard rock influences. The vocals vary between the raspy style of Tom Keifer/Brent Muscat and a more clean delivery. Nothing great, but it's fairly rare and an above average sleaze rock offering.