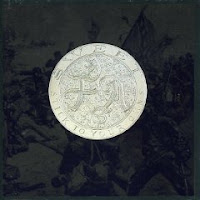 Fletchanator's comment: Silly names aside (guitarists named Thunder and Lightning? Really?), Sweet F.A. put out one helluva debut album in 1990. These boys from Indiana played southern-styled hard rock, sounding similar to Tesla and Bulletboys. The single Rhythm of Action got some radio play. Sweet F.A. put out a follow-up album in 1991, before fading into obscurity. I heard they reunited for a few shows in 2007, but I'm not sure if they're still together.

Posted by fletchanator at 4:49 PM

This is one of my favoritealbums... Patric from Sweden...

I absolutely love this album. The drummer (Tricky Lane) is from my hometown of Leavenworth, KS. The title track's lyrics are really good, Heart of Gold is a very solid ballad and Prince of the City absolutely rocks. Not a bad song to be found on this one. I highly recommend this album!

I partied with these guys in Detroit when they opened for Circus Of Power. They were a lot of fun & a good band!

I just got their 2nd album last week, temptation. At first, I'm not really interested with this band, since I know nothing about this band before. I think their 2nd album is pretty good. But I don't like the cover.

Never heard their debut. So thanks a lot for this post :)

GREAT POST.A FANTASTIC DEBUT ALBUM.THESE GUYS SHOULD HAVE BEEN BIGGER THAT THEY WERE. THANK YOU VERY MUCH.

First of all The band never faded away they simply split up and the lead singer Steve formed a new Band called Red Eye, that never really went too far. The band did re-unite in 2006-2007 as a reunion sort of thing. I used to run sound for these guys in naptown (Indianapolis, IN) at Karma Ritz Music Hall, Backstage, Bentleys and a few other places locally. This band should have stayed together as they really had a good thing going. I spent alot of time with these guys and can say from experience they were some of the nicest folks you could hang with. Sweet F.A. AKA Sweet F*&c&*&G Ass the name itself was actually thought of by J.T. Thunder while driving to a show one night, it got alot of laughs then actually became the name of the band. If you have not heard these two albums, you should definately give them a listen.

does this band will ever release something as cool and kick ass as that album?

i see bands as bulletboys are still up and rocking... i really like that style and sound of stick to your guns.. really kick as... heavy metal of the 80's rulez!