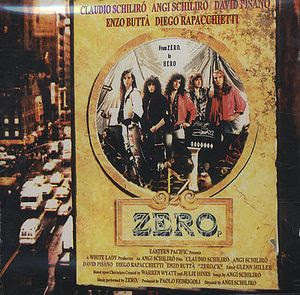 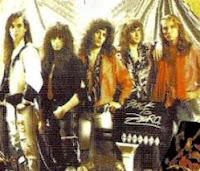 Fletchanator's comment: Although formed in Switzerland, Zero was fronted by the Italian Schiliro brothers. This was their only album under the name Zero, but a year prior this line-up had recorded the second of guitar hero Angi Schiliro's solo albums, White Lady 2. A car accident involving singer Claudio Schiliro spelt the end of Zero, which is a damn shame because these guys are awesome! They play a very polished style of melodic hard rock, along the lines of Fair Warning, Jaded Heart and 1987-era Whitesnake, while their catchy ballads sound a lot like Journey. Claudio has a powerful voice and Angi shreds on guitar. Highly recommended!

Here are some physical media pick ups from the month of December - all are vinyl and all were bought online. 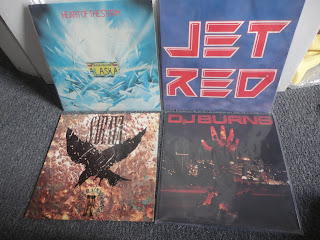 Saraya - When the Blackbird Sings (1991)
- Second album by one of the better female-fronted hard rock bands. 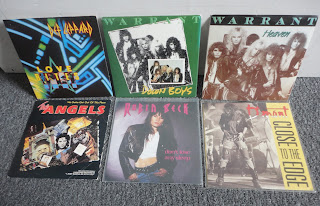 Def Leppard - Love Bites (1988)
- The big ballad off Hysteria, backed with a live version of Billy's Got a Gun.

Warrant - Down Boys (1989)
- My favourite Warrant song hands down and their debut single. Backed with Cold Sweat.

Warrant - Heaven (1989)
- The hit ballad from Dirty Rotten Filthy Stinking Rich. Backed with In The Sticks.

The Angels - We Gotta Get Out of This Place (1986)
- Cover of the Animals hit by this Australian hard rock band. Backed with I Just Wanna Be With You.


Posted by fletchanator at 7:47 PM No comments: 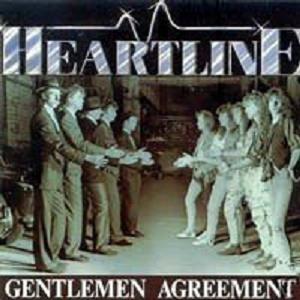 
Fletchanator's comment: This one's a bit of a rarity and goes for decent money on ebay (two up for grabs for $50 and $65 right now). From the information I've been able to gather, this is the only release by German five-piece Heartline. The songs are nothing too special and the production value is average, but this one will appeal to fans of heavier-edged hard rock with high-pitched vocals, ala Dirty Looks, Heavy Pettin' and Warrior. Not as good as any of those bands IMHO, but still a good listen and pretty damn rare, so this should be a welcome addition to any collection. 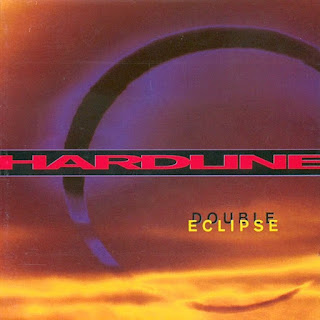 Fletchanator's comment: Hardline is most well-known for containing Neal Schon and Deen Castronovo, who had just left the supergroup Bad English, and who would join a reformed Journey (of which Schon is a founding member) a few years after this. This is rockier than the AOR-heavy Bad English and Journey, with Schon probably enjoying some freedom away from Jonathon Cain's sappy balladry in those other bands. Here he really gets to rock out, while singer Johnny Gioeli (earlier of Brunette, lately of Axel Rudi Pell's band) has an excellent voice. The result is a fantastic melodic hard rock band, one of the very best to come out of the early 90s. Highly recommended! 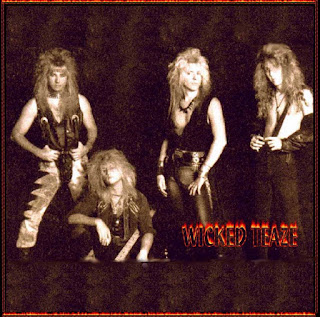 Fletchanator's comment: This six-track EP comprises the entirity of Florida-based Wicked Teaze's recording output. Like a lot of Sunset Strip-sounding hard rock bands they split in the mid-90s, and this album was re-released by Retrospect Records in 2005. In terms of sound, Wicked Teaze are heavy-edged glam metal - recommended for fans of early Motley Crue, WASP, Nitro and Keel. Singer Albro's voice reminds me of Blackie Lawless from WASP, with less of the gravel and more high notes, while Wallace does some serious shredding. Good stuff. 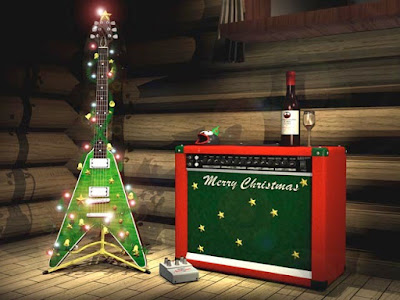 Posted by fletchanator at 10:33 PM No comments: 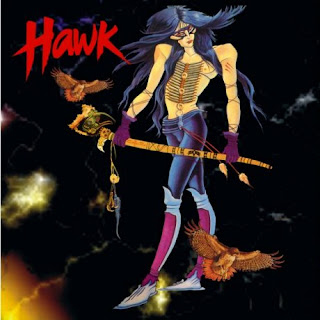 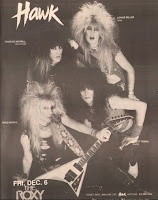 Fletchanator's comment: Hawk were one of the many LA-based bands, and were led by guitarist Doug Marks, who went on build a fortune in learn-at-home guitar instructional videos. Earlier versions of the band included Scott Travis (Judas Priest) and Lonnie Vincent (BulletBoys). By 1986 he had assembled a new line-up of hired guns including future The Cult/GNR/Velvet Revolver drummer Matt Sorum.
Despite their glam appearance, Hawk were melodic heavy metal in the style of Dio (singer Fefolt has a great Ronnie James-esque voice), with Marks taking centre-stage with his kickass shredding. 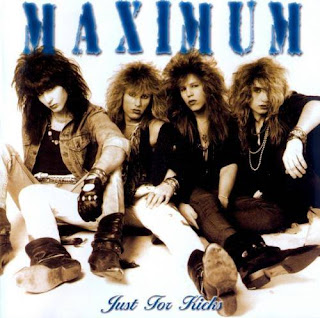 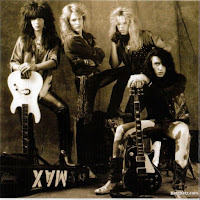 Fletchanator's comment: Maximum might have been from New England (Boston to be precise) but their sound was pure LA Sunset Strip sleaze. Unfortunately this, their only album, was shelved when their label, Enigma, went bankrupt, waiting until 2002 to be released on CD by German label Sunset Records. It's a shame, because this is great stuff - rocking song after glam-infused song. Recommended for fans of bands like Pretty Boy Floyd and early Poison. 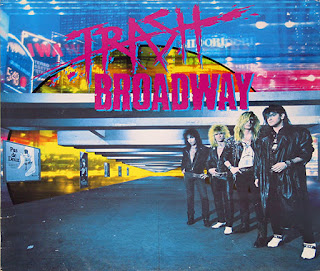 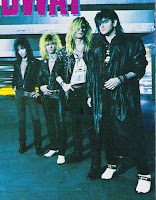 Fletchanator's comment: I don't know too much background on this one. It appears that Trash Broadway were another "one-and-done" band from the late 80s, based out of Boston. Guitarist Joe Stump went on to become a successful solo artist in the style of Yngwie Malmsteen, and his axe-work is the definite highlight on this album. The singing, song-writing and overall sound are solid but not spectacular - it's easy to see why they got lost in the shuffle. But Stump's shredding makes this one stand out from the pack - download it if you're a fan of hard rock with superior guitar-work, ala Dokken or Extreme. 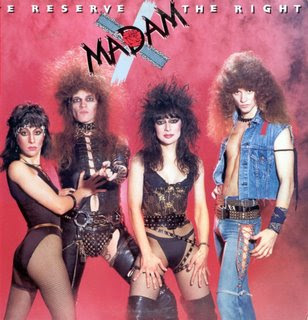 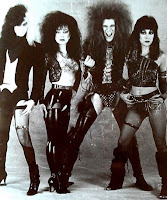 Fletchanator's comment: There were plenty of glam metal bands with female lead singers, but it was far more rare to find one with a male lead singer and a female lead guitarist. Well, Madam X had that, as well as a female drummer and male bassist! And on top of that, they seriously rock!
The name Madam X is mainly known in hard rock circles as the band that Sebastian Bach was in immediately prior to joining Skid Row (they didn't release an album with that line-up), but before that Bret Kaiser was the front man, sounding a lot like a glammier version of Rob Halford. Today he's an Elvis impersonator and reunited with this line-up of Madam X in 2014 for a reunion concert and new single.
The female portion of Madam X is made up of the smoking-hot Petrucci sisters. Maxine went on to form her own band, Maxine, while Roxy gained the most fame of the four, forming the all-girl glam metal band Vixen.
Madam X is excellent glammy party rock in the style of early Motley Crue and Quiet Riot. Highly recommended! 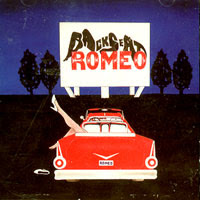 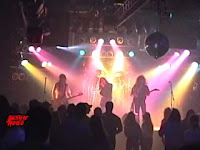 Fletchanator's comment: This Syracuse, New York-based quartet came along just before the grunge apocalypse and put out a pretty rockin' little album (which is pretty tough to find on CD). The production (on indy label Ice Productions) is a little rough around the edges, but the musicianship is tight and frontman DR Rydher (who still sings 80s metal in Syracuse for covers band 3 Inch Fury) has the necessary swagger and vocal stylings. Sound-wise, they remind me of early Bon Jovi, perhaps with a hint of the poppiness of the hair-metal mainstays of the time (Firehouse, Trixter, Warrant etc). Backseat Romeo don't offer anything too flashy, but guitarist CJ Tyler throws in some George Lynch-esque shredding in a few places. Overall a fun album to rock along to.

Posted by fletchanator at 9:06 PM No comments: 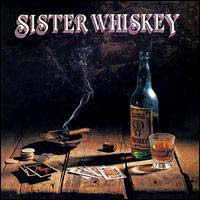 Posted by fletchanator at 1:51 PM No comments:

As of right now, all of the links on this blog should now be up to date. If I've missed any, please let me know.
Posted by fletchanator at 5:29 PM 1 comment: 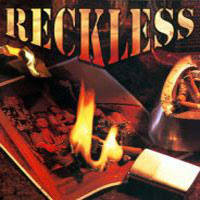 Fletchanator's comment: The only full-length release by Swedish hard rockers Reckless, who offer a very polished sound. The guitar licks are great - this one definitely rocks, while keyboards add some AOR pomp to proceedings. Singer Axelsson has a voice that at times sounds like your typical hard rock vocalist, hitting all the high notes, but then at other times it has a raspy quality to it. Reckless remind me of a lot of other Swedish bands like Treat, Dalton and 220 Volt, with some Bonfire mixed in.
This CD was released by MTM Classix in 2004 and includes three bonus tracks - which are essentially the band's first EP.

Posted by fletchanator at 2:36 AM No comments: