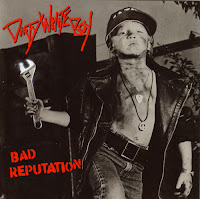 Fletchanator's comment: Drawing together former Giuffria vocalist David Glen Eisley and guitarist Earl Slick (who has played with such bands as Doro, King Kobra, Little Caesar and with David Coverdale), Dirty White Boy had a lot of hype when they put out Bad Reputation in 1990. Unfortunately they were another victim of the backlash against hair metal in the early 90s, which is a shame, because their only album was a great effort. It has a harder, bluesier edge than Giuffria, while mixing in some great melodic moments.

hi from Poland. Could re-upload 5. Dead Cat Alley - there is a little fake at the beginning of this song - and I like that one very special.

Can upload again? unfortunately the link is expired