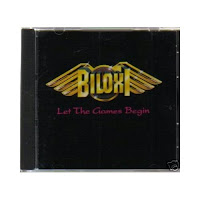 
Fletchanator's comment: This is the first of two albums released by Los Angeles band Biloxi. Released on a small indy label, the album garnered the band considerable success, with their melody-laden slice of AOR, similar to Boston and Night Ranger.

great post. thanx for all the great lps. mick.

Great album! If there's anyway of anybody reposting this link, then you would make another very very happy :-)