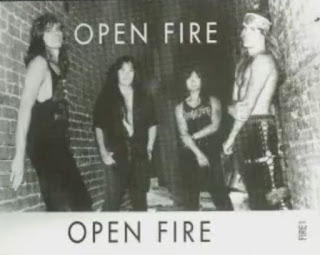 
Fletchanator's comment: Following on from the cassette rip I posted of Wild Child, here is another release that as far as I know is only available on tape. Open Fire were a four-piece from Hawaii, a land that is hardly synonymous with heavy metal. They later released a full-length album, No Uncle of Mine, on CD in 1995. But none of the songs on this self-released EP were included on that, so this is likely the only place you can hear these tracks. Bassist Jack Acevedo has uploaded some Open Fire songs onto youtube, but today the band are pretty much a footnote in history. Singer Wida apparently joined a metal covers band called Slug after Open Fire split up.
Soundwise, I can hear similarities with Motley Crue, LA Guns and bands of that ilk but they also incorporate a heavier, faster sound that adds elements of traditional heavy metal bands like Metal Church and Accept.